MTR/SASSI implements the new Response Simulation Method for incorporating spatial incoherence of ground motions in the SSI analysis using SASSI. This new procedure addresses the issues with currently available incoherency procedures in SASSI that make them unattractive for implementation on projects.

The Response Simulation Method was developed to address the numerical possibility issue in TF-SRSS and interpolation issues in Simulation Mean/Algebraic Summation methods associated with the calculated transfer functions. In the Response Simulation Method, for each frequency of vibration the structural response transfer function at each DOF due to incoherent ground motion associated with each significant mode of the coherency matrix is determined using a random phase angle sampled between –П and +П. The combined transfer function at any given structural DOF, which now includes the contribution of all the significant modes is convolved with the reference input motion to calculate time history of the response for a single simulation. This process is repeated multiple times each using a random phase angle. The final time history response is then calculated by taking the mean response of all the simulations. In general, 20 to 30 simulations are sufficient to obtain convergent responses.
The Response Simulation Method requires approximately the same numerical effort as the TF-SRSS Method, which in both cases are controlled by the number of significant modes to be solved. The Response Simulation Method does not require any significant additional effort because each simulation is part of the post-processing effort.

The benchmark test problem referenced in [1] and [2] are used to validate the accuracy of the new Response Simulation Method implemented in MTR/SASSI. The coherent and incoherent structural responses are compared against those reported in the above references from stochastic analysis using the computer program CLASSI.
Figure 1 shows an idealized stick model of nuclear island with rigid foundation founded on hard rock. The structural model consists of three concentric sticks with some interconnectivity representing the auxiliary/shield building (ASB), Steel Containment Vessel (SCV) and Containment Internal Structures (CIS). No torsion due to mass offset is considered. The foundation slab is 150 x 150 ft. in plan dimensions. The rock velocity profile is shown in Figure 2. The ASB has predominant frequencies less than 10 Hz. The predominant frequencies of the SCV are 5.5, 6.14 and 16 Hz for the X-, Y- and Z-directions, respectively. The predominant frequencies of the CIS are higher than 10 Hz.
The input motion consists of three orthogonal components of acceleration time histories spectrally-matched to uniform hazard rock spectra containing high frequency content. Figure 3 shows comparisons of the 5%-damped acceleration response spectra (ARS) of input time histories with target spectra for the three components of the input motion. The control motion is applied at the free-field ground surface assuming vertically propagating plane waves (i.e. no wave passage effects).
The new Response Simulation Method implemented in MTR/SASSI was used to obtain the response of the structure due to spatially incoherent ground motions. The analysis was carried out to a passing frequency of 60 Hz. The horizontal and vertical rock coherency functions used for this study are shown in Figure 4 and 5, respectively.
The accuracy of the Response Simulation Method implemented in MTR/SASSI was examined by calculating the typical structural responses in terms of 5% damped acceleration response spectra (ARS) at the tops of ASB and SCV obtained as mean of 10 simulations with 5 significant modes of the coherency matrix considered. Figure 6 and 7 show comparison of the results with the target solutions obtained from CLASSI for the ASB and SCV, respectively. Also shown in Figures 6 and 7 are the coherent responses from MTR/SASSI and CLASSI analyses. An inspection of the coherent as well as incoherent results show excellent agreement both in terms of the spectral amplitudes and zero-period accelerations at all frequencies. The results are typical for other locations. 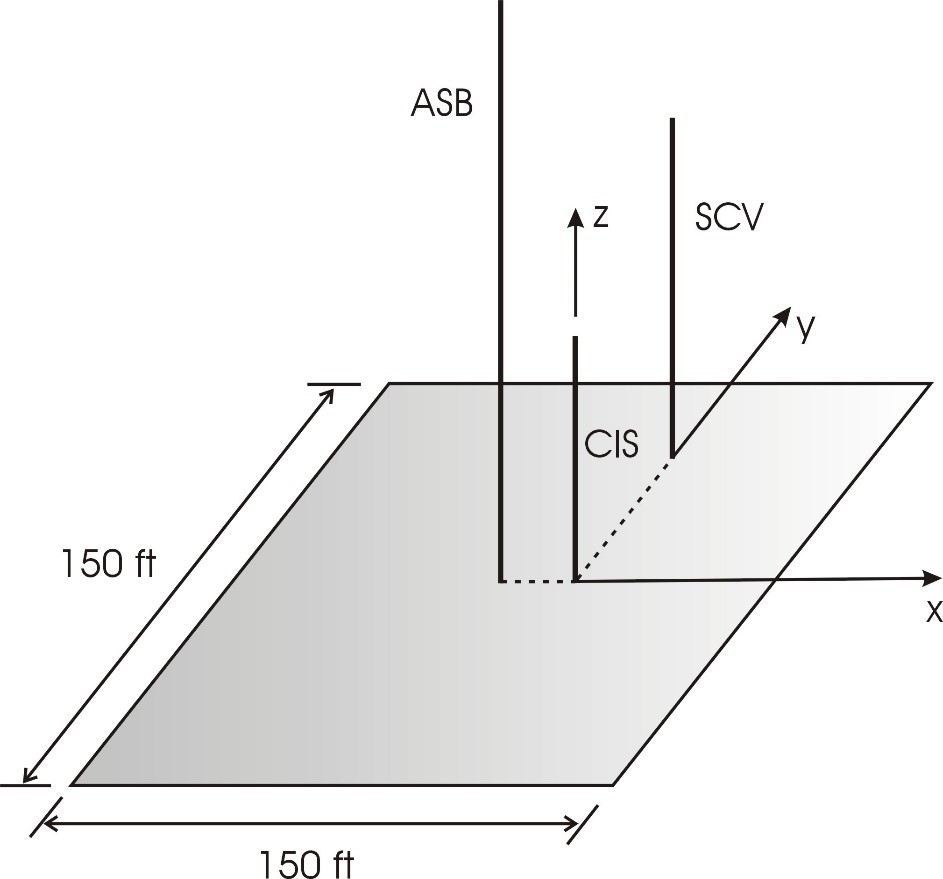 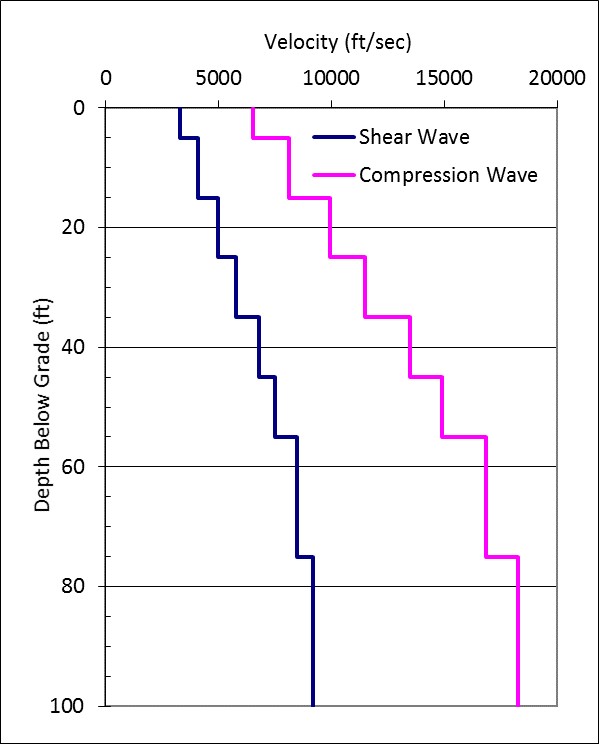 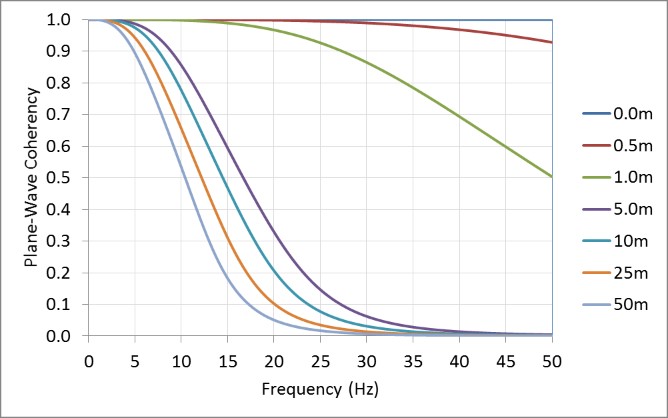 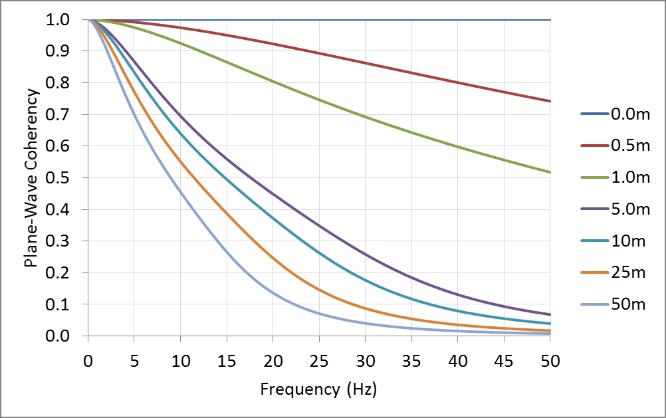 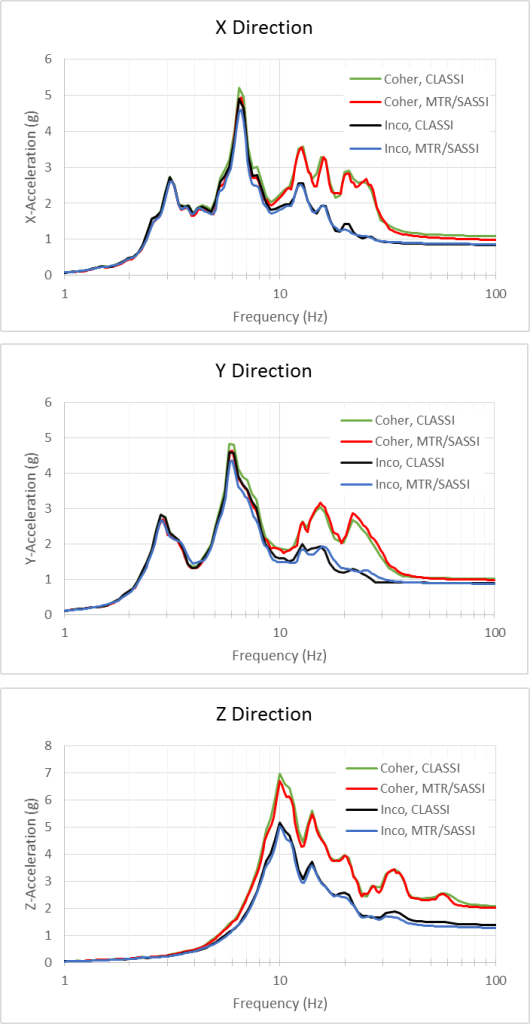